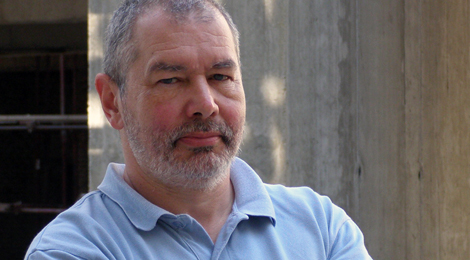 Radivoje Dinulović (Belgrade, SFR Yugoslavia, 1957) He graduated at the Faculty of Architecture, University of Belgrade in 1982, and received MSc in Contemporary Architecture based on research of environmental architectural stages of BITEF festival in 2004. Thesis related to contemporary theatre architecture he finished in 2014 and received PhD in Architecture at the University of Novi Sad. He has been working for ten years in theatre Atelje 212 in Belgrade as technical director (1985-1995). With a group of colleagues, in 1991, he founded National Centre of OISTAT for Yugoslavia (later, Serbia) – YUSTAT, and participated in establishing and running Biennial of Scene Design, as a main national exhibition in the field of theatre architecture, design and technology.

Since 1996 he teaches architecture at the Faculty of Technical Sciences, University of Novi Sad, Serbia, where is now professor of Scene Architecture & Design, as well as Curriculum Advisor for all levels of studies of scene design. He was professor at the Faculty of Dramatic Arts (1998-2012) & Centre for Interdisciplinary Studies (2001-2012) at the University of Arts in Belgrade, visiting professor at the St Cyril & Methodius University in Skopje (Macedonia) and University of Banja Luka (Bosnia & Herzegovina). Public lectures he gave in Great Britain, Italy, Czech Republic, China, Russia, Hungary, Bulgaria, Croatia, Bosnia & Herzegovina, Macedonia, Montenegro and Serbia.

He was founder and director of Interdisciplinary MA Studies in Scene Design at the University of Arts in Belgrade, and, later, DA studies in the same area, first DA study programme at the Balkans. Since 2013, he runs studies in Scene Design, Architecture & Technology (at the BSc, MA & PhD level) at the University of Novi Sad. He was curator of the national exhibition of Serbia at the PQ 2007 and National Commissioner at the PQ 2011 and was member of the International Jury for the PQ 2015.

He is author of over one hundred architectural and urban designs, mainly of performing spaces, in Serbia, Montenegro, Bosnia and Herzegovina, Macedonia, Albania and Russia and the scene designs for theatre, concerts and TV shows in Serbia, Bosnia & Herzegovina and Croatia. He exhibited architectural and artistic works in United States, Great Britain, Greece, Czech Republic, The Netherlands, Russia, China, Italy, Slovenia, Bosnia & Herzegovina, Macedonia, Montenegro and Serbia. He published books “Theatre – Politics – City” (with Aleksandar Brkić) and “20th Century Theatre Architecture”, as well as more than 50 essays, studies and articles in different books and magazines.

His students received international awards and exhibited their work at the prestigious international manifestations, such as Venice Biennial of Architecture in 2004 and 2014, and Prague Quadrennial in 2007, 2011 and 2015.