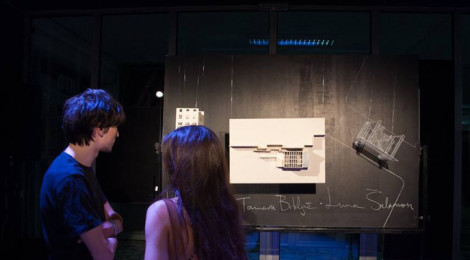 OPENING OF THE EXHIBITION “254 DAYS”

AMBIENTAL SCENE SPACES OF SUBOTICA – Experience of the immediate past

The theme of this year’s synthesis project is the research of the immediate past of the city of Subotica as a town with an extremely rich theater and scene contemporary history. The students studied the cultural and theater heritage of Subotica as well as influential drama writers whose activity is closely related to the area of ​​this city.

In this project, each student separately designed an ephemeral theatre structure based on the opus of the assigned dramatic writer (Miroslav Krleža, Ferenc Deak, Dušan Jovanović, Aleksandar Popović and Goran Stefanovski), after which based on the selected work of the given playwright, students designed the conceptual scene design for the theatre play.

The next step was the artistic action of students in the premises of the National Theater – Népszínház, realized within the Night of Museums event, where students came up with their ideas on the spot and designed and performed works as a part of the process of their synthesis projects.

The final stage is a retrospective exhibition that represents the final step of this project. 254 days is the duration of the work process, which resulted in this exhibition. Also, this time period is closely related to the space in which the project originated.