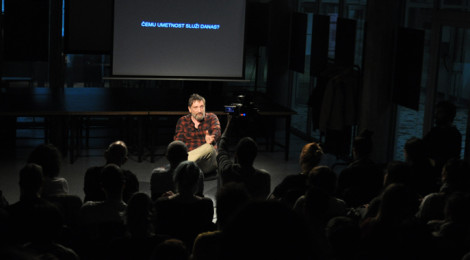 WHAT IS TODAY’S ART USE?

WHAT IS TODAY’S ART USE?

On Tuesday, October 17th 2017, an introductory lecture by Zlatko Paković was held on the occasion of the beginning of the new school year at the bachelor studies of Scene Architecture, Technique and Design at the Department of Architecture and Urban Planning of the Faculty of Technical Sciences in Novi Sad.

Zlatko Paković (1968, Valjevo), theatre director and writer, graduated from the Department of Theatre and Radio Directing at the Faculty of Dramatic Arts in Belgrade. He developed a special poetics of a critical, dialectical theater, an accentuated playful expression. For him, the theater is an inseparable part of the aesthetic and social act. Hans-Thies Lehmann, the most prominent living theorist of the drama, published an essay about his play “The Enemy of the People as a Brecht Educational Piece” saying it is as an entirely new way of interpreting Brech’s legacy.

He is a regular columnist and theater critic of the daily news Danas. He won the “Desimir Tosic” Prize for Publicity, International Ibsen Scholarships for Theater Directing and Scholarship of the Vienna Museumsquartier for Literature.

← AT THE CONSTRUCTION SITE, AGAIN: ARTISTIC ACTION
PERFORMANCE OF SERBIA AT THE PRAGUE QUADRIENNIAL OF SCENE DESIGN AND PERFORMING SPACE 2019 →